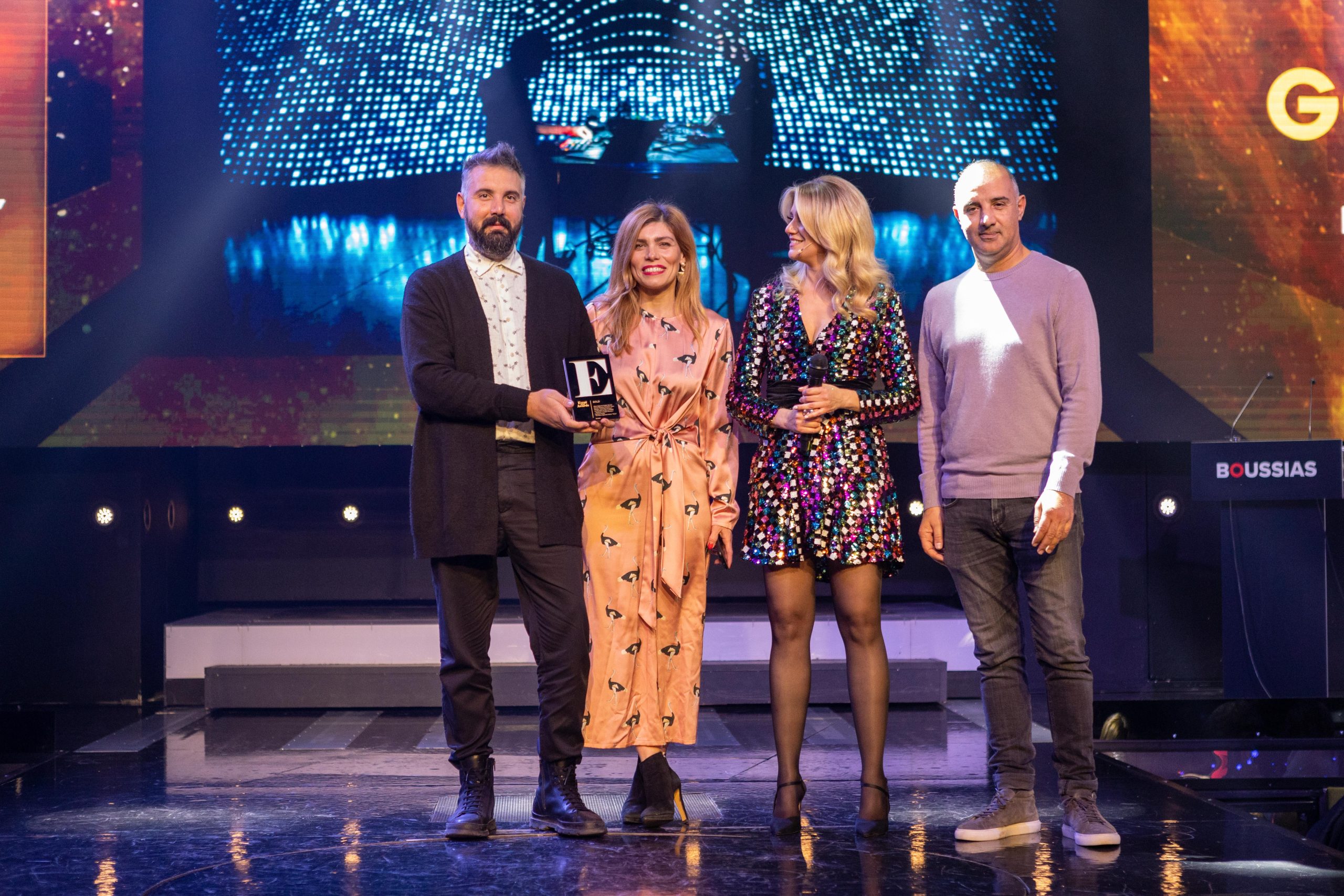 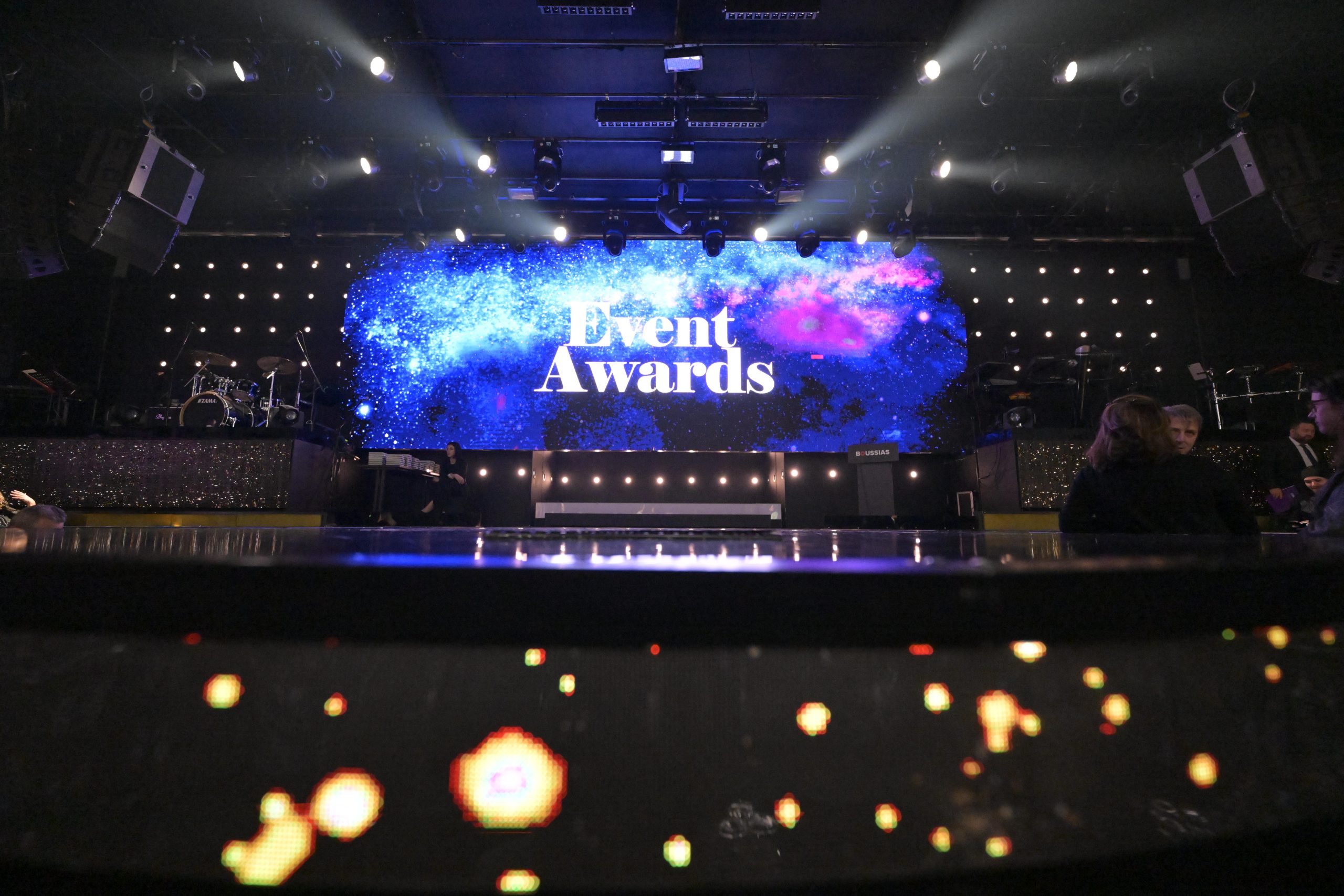 The 7th edition EVENT AWARDS of Boussias Communications offered ADAF the opportunity to stand out by winning four significant distinctions for projects it implemented during 2022. 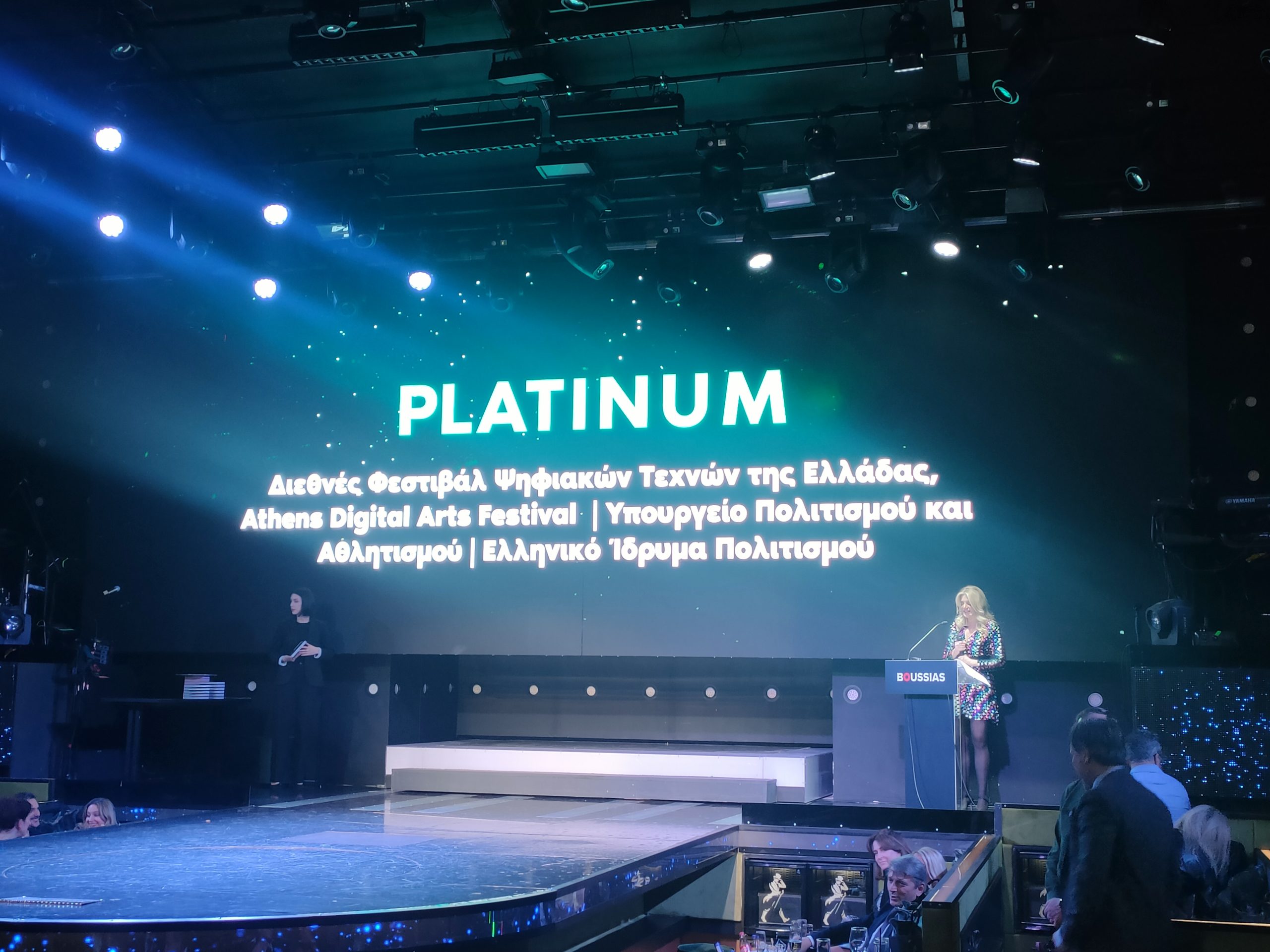 The Athens Digital Arts Festival (ADAF) created “Culture Path“, an AR&VR pavillion experience for the Ministry of Culture and Sports

Culture path has been presented till today at: 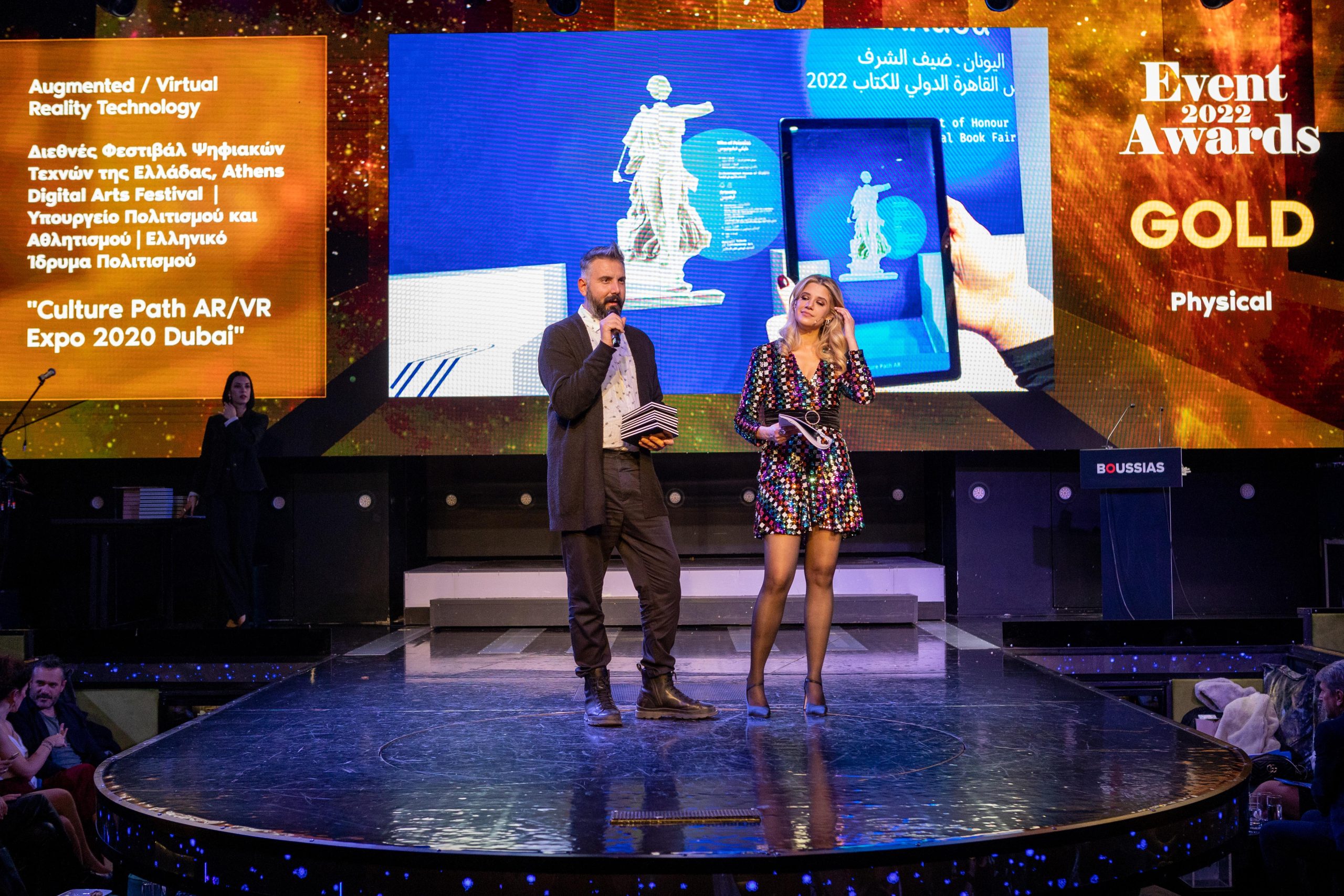 Culture path was created in September 2021 for the pavilion of the Ministry of Culture and Sports at the 85th Thessaloniki international trade fair and later  visited Cairo for the 53rd international book fair – Greek pavilion where Greece was also the country of honour. Following its successful tour, it visited  Dubai and the national pavilion in the framework of EXPO DUBAI 2020, while it is now exhibited in the International Airport of Athens “Eleftherios Venizelos” 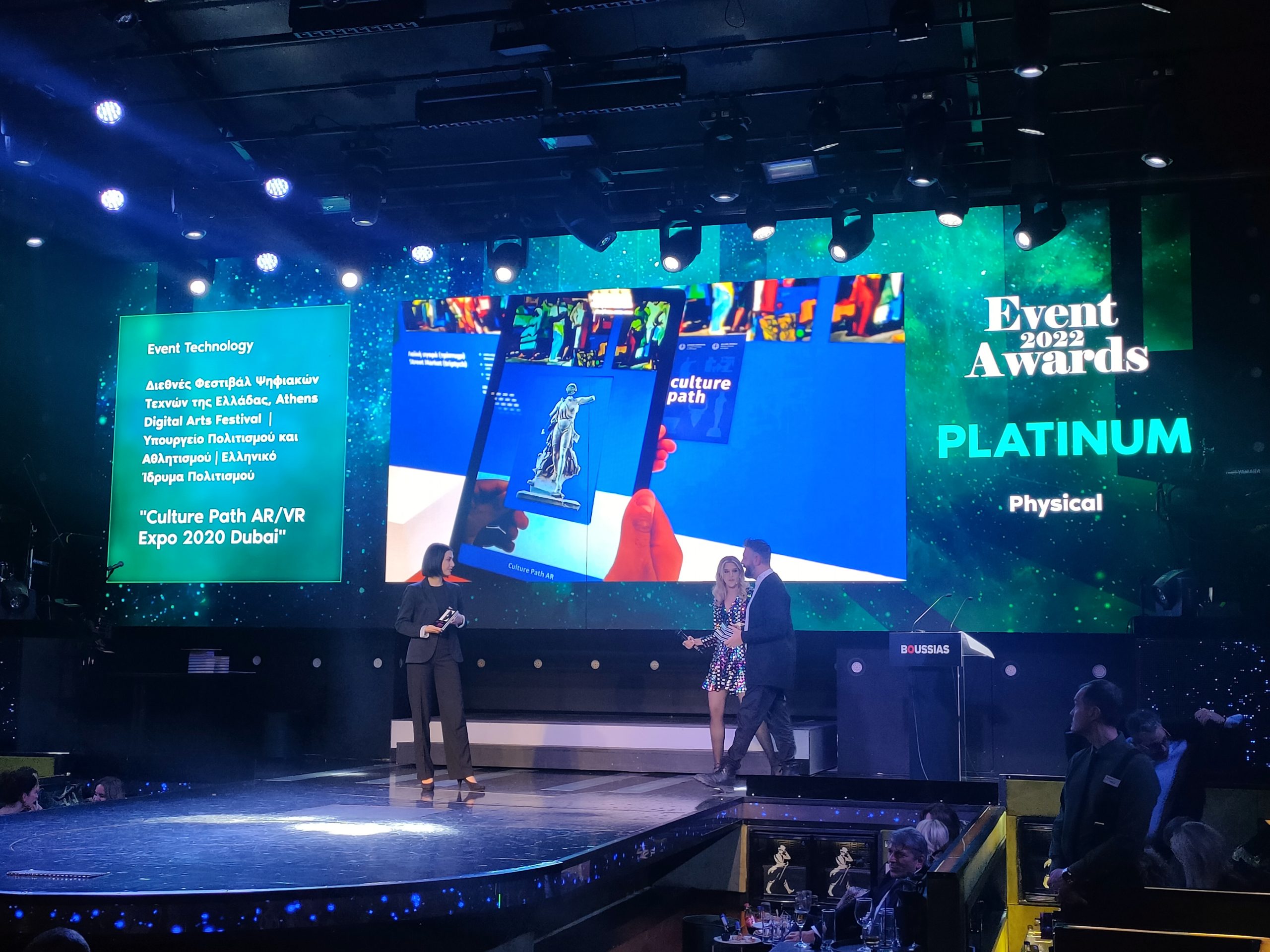 In such activities , the use of technology is achieving the most impressive presentation of  content to the viewers, offering a new light to the Greek cultural product. This way we have accomplishing best dissemination and promotion of Greece abroad while strengthening its attraction to tourists.

An interactive pavilion, a path of culture, which with the facilitation of AR & VR technology,  the Greek Cultural Heritage is “meeting” and “dialoguing” with works of modern and contemporary creation. Culture Path is prompting and creating a dialogue between the past and the present gazing towards the future. An educational proposal- reason for a dialogue that exploits the borders of art and culture  widening the spectrum of imagination and calling for a future visit to the premises of the museums. 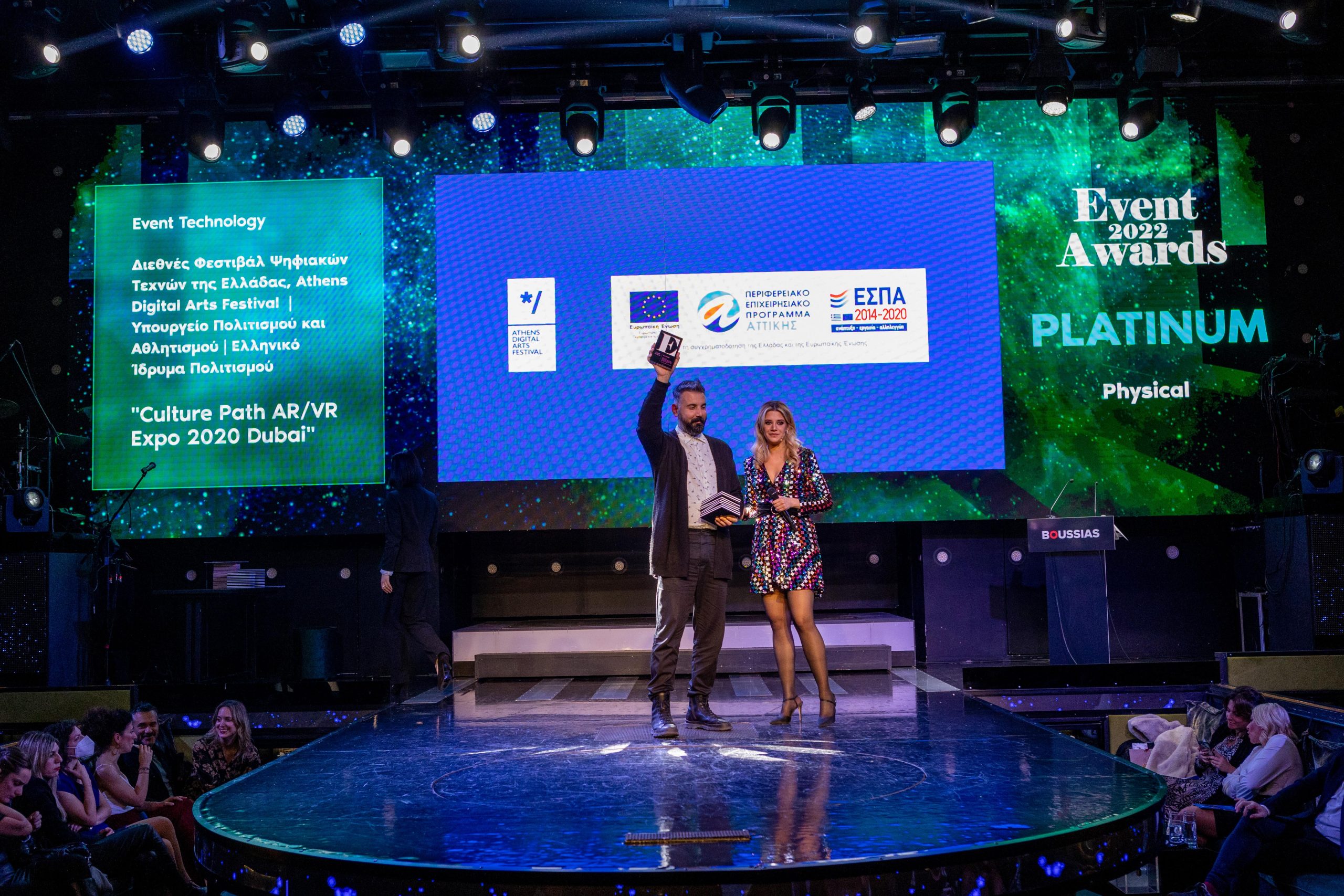 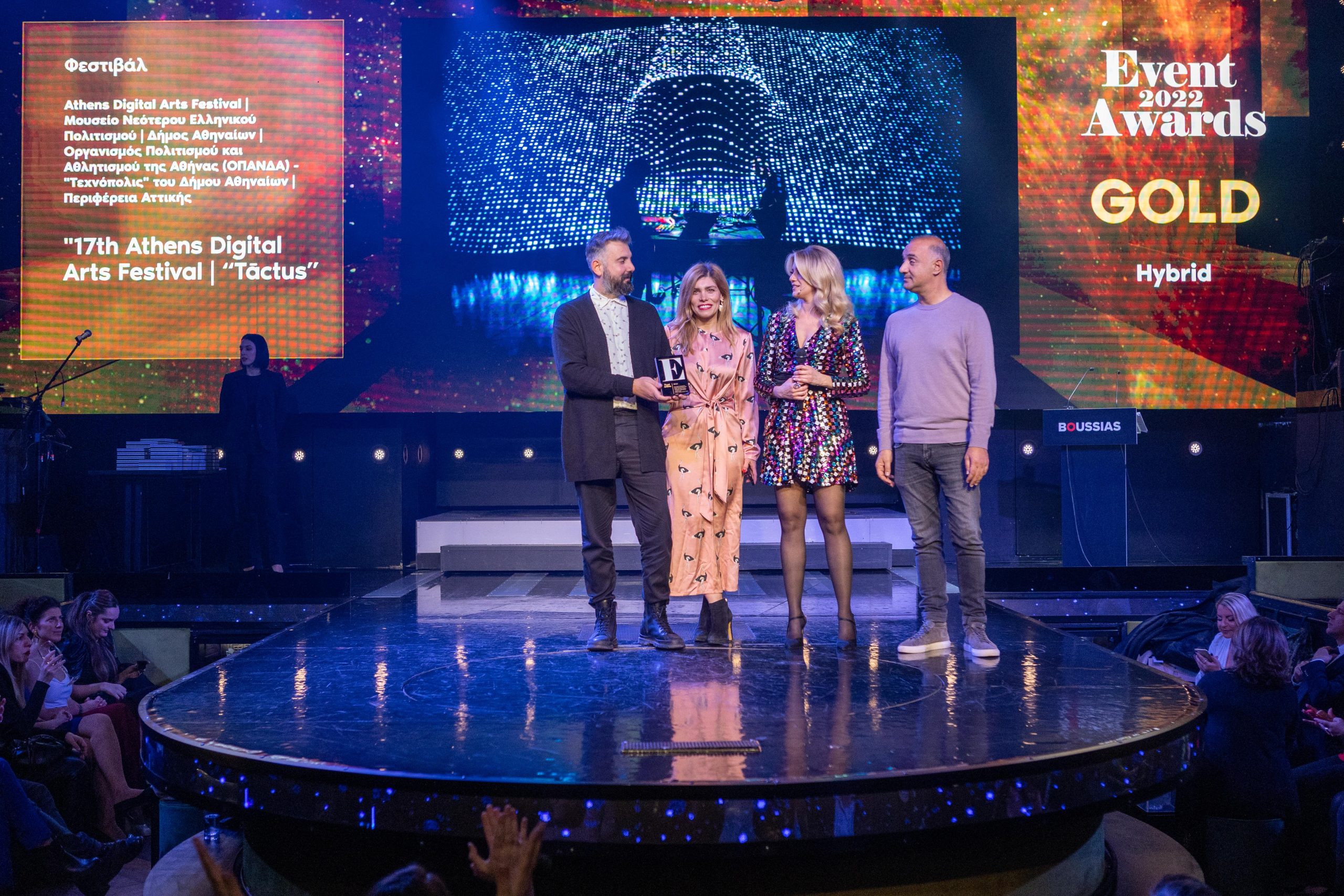 The buildings and outdoors spaces that are hiding inside the building block belonging to the Museum, have been unveiled to the public, hosting  works of digital technology. For the ADAF event spaces, we have utilised as well the extra spaces of the museum in the area of Plaka, like the Tzisdarakis Mosque and the Bathhouse of the Winds among others.

Interactive installations, video art works, animation & web art, extending reality experiences in the AR & VR sphere, performances, talks and workshops, composed the content of this impressive program that counted thousands of Greek and foreign participants. The activities of the festival occupied the proximate area of the museum in the city centre, as well as small roads in the so called “Athenian Merchant Triangle”. 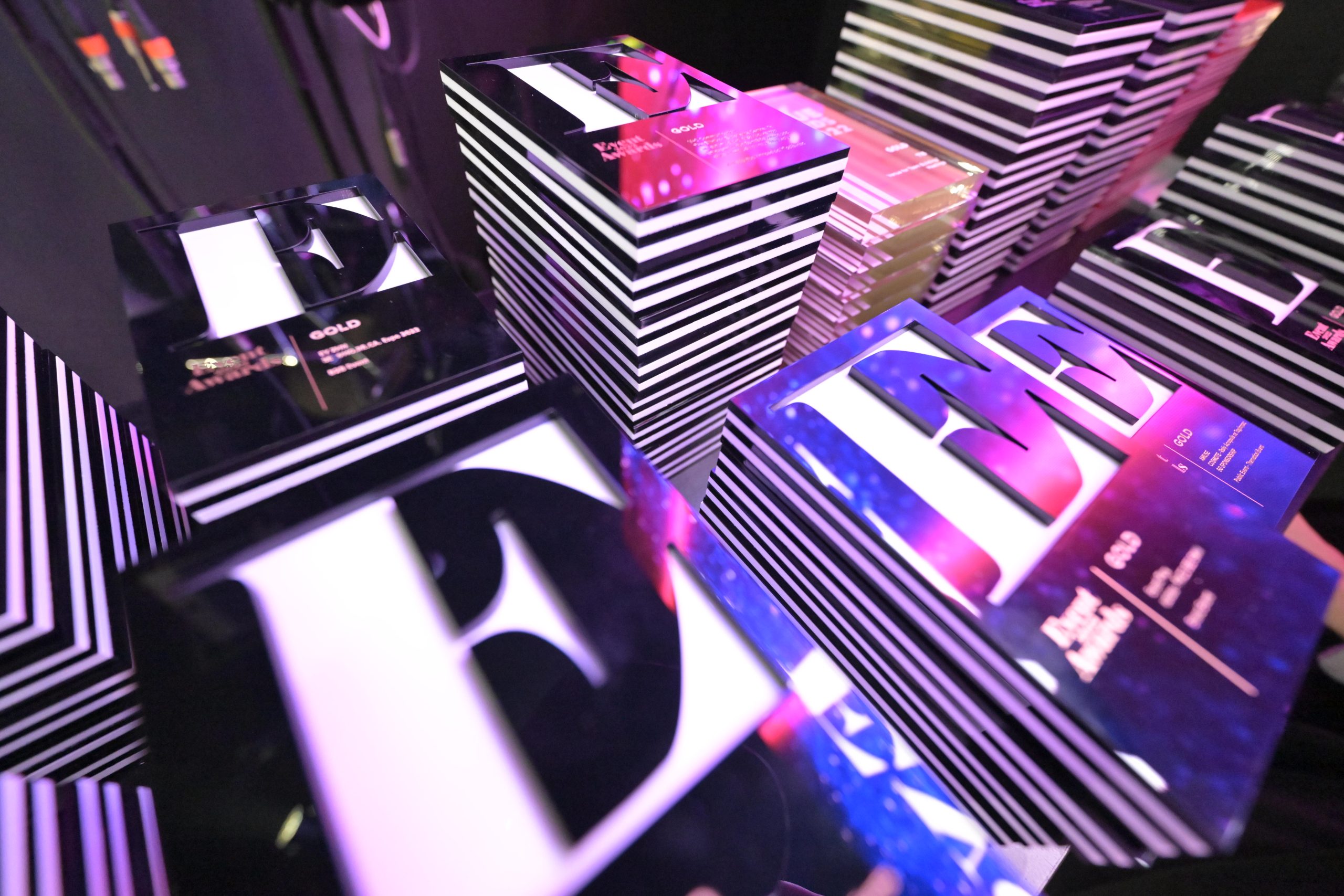 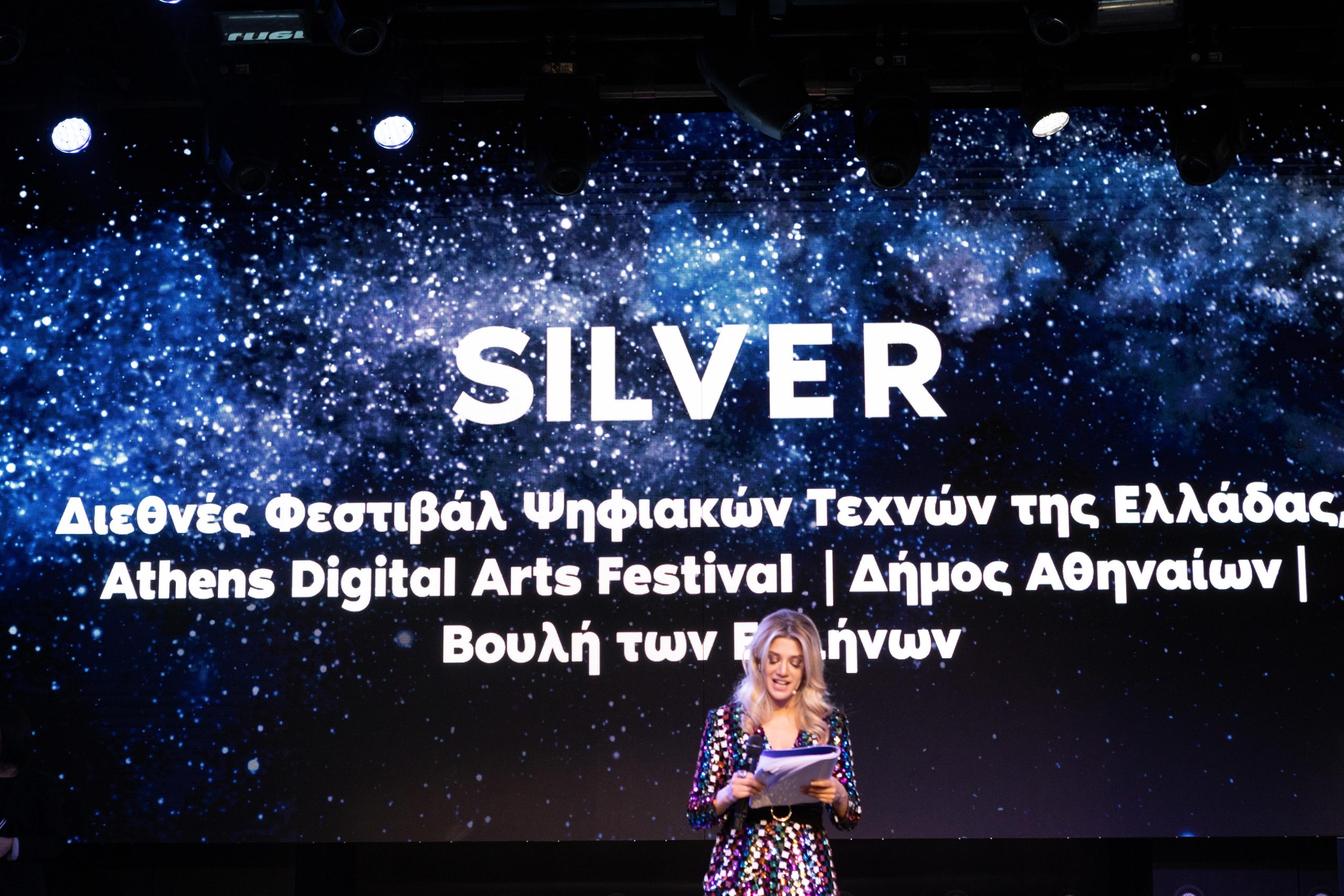 One more 3D Mapping Show  from Athens Digital Arts Festival. A Christmas spectacle 3D projection mapping for kids and adults specially curated from the international festival of digital arts in Greece, Athens Digital Arts Festival.  Between  28 – 30 of December 2021 the west facade of the Greek Parliament transformed into a Christmas celebratory tale with Santa Claus, his Elves and Nutcrackers that animated complementing the architectural characteristics of the building. For yet another year, ADAF painted and illuminated the Parliament of Greece with a 3D Projection Mapping Show transferring thus the Christmas Spirit and wishes for the new year to the whole city and country. A celebratory and unique event that took place both physically and in live broadcasting both on television and the internet (social &  web pages), offering to the audience the opportunity to follow it despite their position on the worldwide map.
Award: Bronze | Category: Cultural Event | Work:”From Where I Stand” |Participants: The International Festival of Digital Arts in Greece, Athens Digital Arts Festival (ADAF)/ Municipal Art Gallery of Larissa G.I. Katsigras Museum 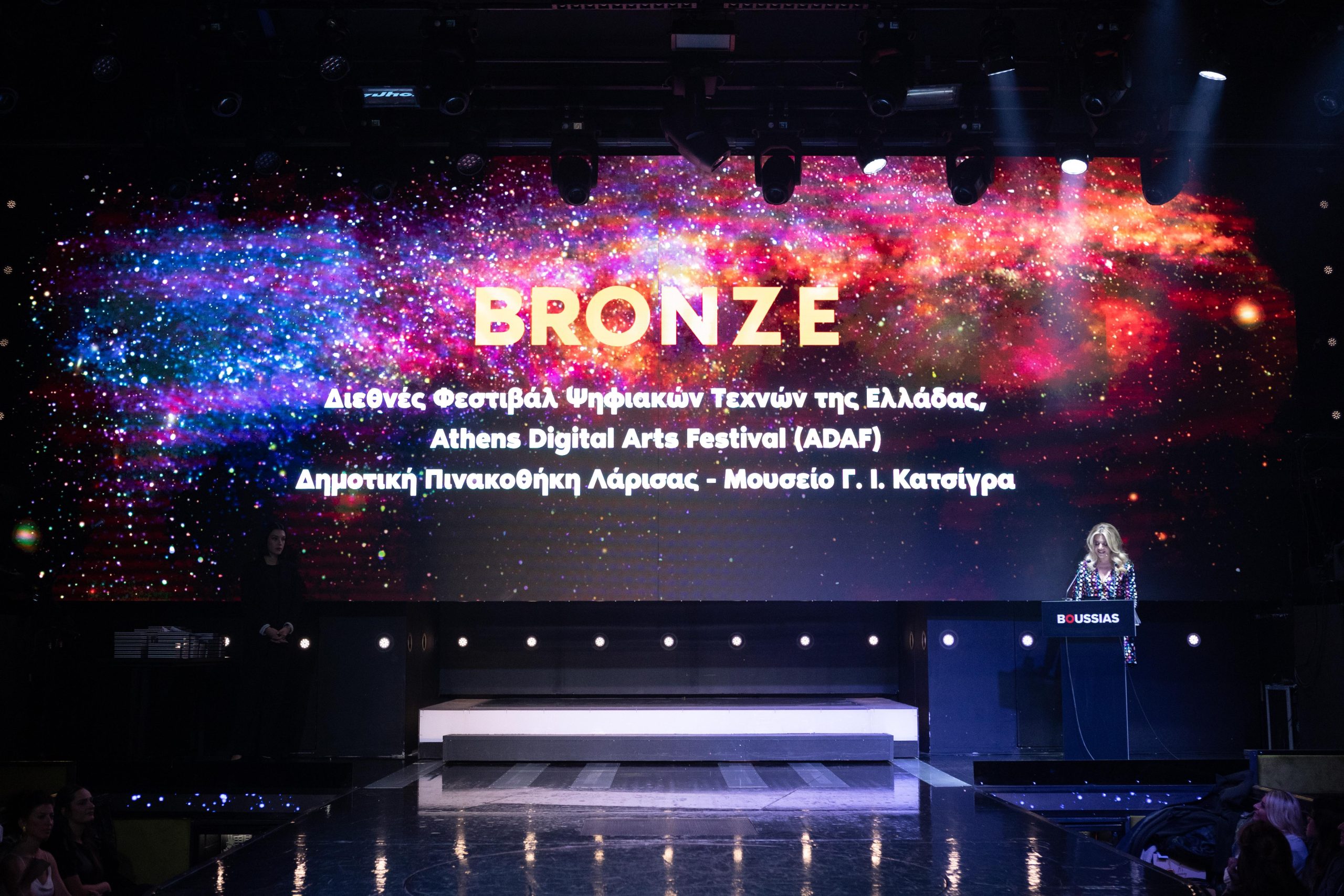 Athens Digital Arts Festival (ADAF) in collaboration with the Municipal Art Gallery of Larissa G.I. Katsigras Museum, presented “From Where I Stand,” the first digital art exhibition to take place in Larissa. 114 artworks from the whole spectrum of digital arts emphasising in interaction and cutting edge technology, travelled to Larissa, offering the opportunity to the audience to meet digital art and its capabilities through a program of outstanding aesthetics. The event entertained grand visibility while the artworks enchanted the local audience.  The visitors came in contact with AR and VR works,  Web art works, Immersive works, Interactive works, Video games, 3D Mapping Projections, as well as Digital images, Video art and Animations by greek and international artists as well as local artists from the city of Larissa. Additionally the local community sharing the works and their experience through their social media, created significant experience visibility making Larissa a mention worthy point on the map of the contemporary cultural creativity.

Open Air Screenings at the square of Agios Dimitrios in Ampelokipi