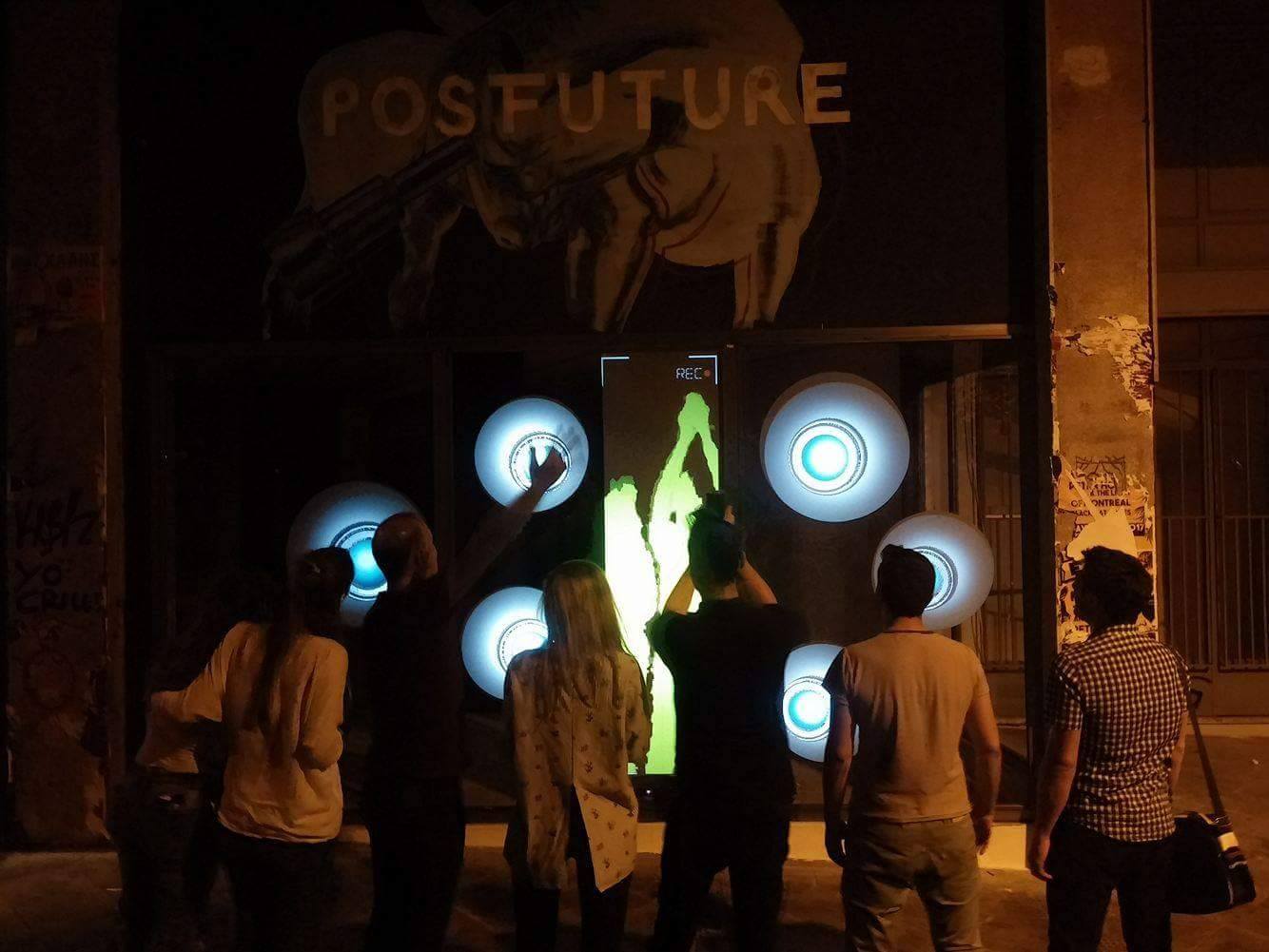 Athens Digital Arts Festival (ADAF) within it’s 13th edition, introduces to the Athenian public, from May until June, the interactive installation REC of Elektro Moon group as also the mural #PostFuture of the visual artist Nikolaos A. Tsounakas, who was inspired by ADAF’s 2017 theme #PostFuture.

REC is an interactive installation set in today’s cultural context where surveillance over the society is no exception, where face tracking and face recognition in order to collect powerful data is an integral part of digital tools we use every day. Apparently, today’s society is ready to embrace many forms of surveillance and data collecting believing that those which do not impose limits on the society can bring about more convenience. But unfortunately, we discover that our e-mails are read, we can be watched and listened by built-in cameras and microphones in our smartphones, TVs, and computers and collected data are used to build economic power against personal privacy. Whether we like it or not, we engage in daily interaction with real or virtual methods of gathering data about our lives. REC installation perfectly illustrates this modern system of dependence.

The viewer doesn’t really need to love art to become the focus of artistic work. Likewise, the monitoring equipment does not necessarily need to be real to create an atmosphere of control. Sometimes a mere impression of its existence will do.

In the process of interacting with the installation, the spectators’ approach usually evolves from just playing and having fun to the afterthought and moment when the question appears: is this data of me collected? And if so, what is it used for afterward?

The installation is designed for city public spaces to enter it spontaneously, experience it and becoming part of it without time and amount of participants limitations.

Nikolaos A. Tsounakas
Nikolaos A. Tsounakas is an up and coming artist that currently lives and works in Athens, Greece. Through his work, he tries to communicate the modern contradictions we face as creators and humans in general. These contradictions are physical and digital, natural and man-made, virtual and actual, animalistic and human. His inspiration comes from the observation of the human behavioral patterns in modern day society accompanied with the observation of the behavioral patterns of nature. He is creating works that derive from answering or asking vital questions for our fragile human existence.

Elwira Wojtunik and Popesz Csaba Láng are internationally recognized Polish-Hungarian duet of multimedia artists known as Elektro Moon Vision, working at the intersection of creative computing, design, and light-art, creating interactive multimedia installations, stage projections design, 3D video mappings and scenography projections for theatre and opera. In their works, they use a variety of new media tools, often implementing their own codes, patches, and mathematic algorithms. Their works were presented at significant international digital media art exhibitions and events around the world, including the Museums Quartier in Vienna, the New Media Art Biennale WRO 2011, 2015 in Wroclaw, Akarenga Soko Gallery in Yokohama, Japan, TADAEX in Tehran, in Iran, PdCon in NYC. In Krakow, where they live, their live visuals could be seen at the Unsound Festival in 2016. Re-Kreacja, an interactive mapping installation, is included in the collection of Contemporary Art Gallery Bunkier Sztuki, Krakow, Poland. The experimental video NZ/X won the 1st prize and was published in the frame of the Chopin Year competition by Warsaw Electronic Festival and the Zachęta National Gallery of Art in Warsaw. They are scholarship holders of the Artist-in-Residence program at MuseumsQuartier in Vienna (2010). Since 2012, they are curators of the International Digital Art Festival Patchlab in Krakow. They are members of AV node network – an international network of artists and professionals organizing festivals and/or working in the fields of audiovisual live performances.

Founders of Share: Krakow, unit of a global organization dedicated to supporting collaboration and knowledge exchange in new media communities.